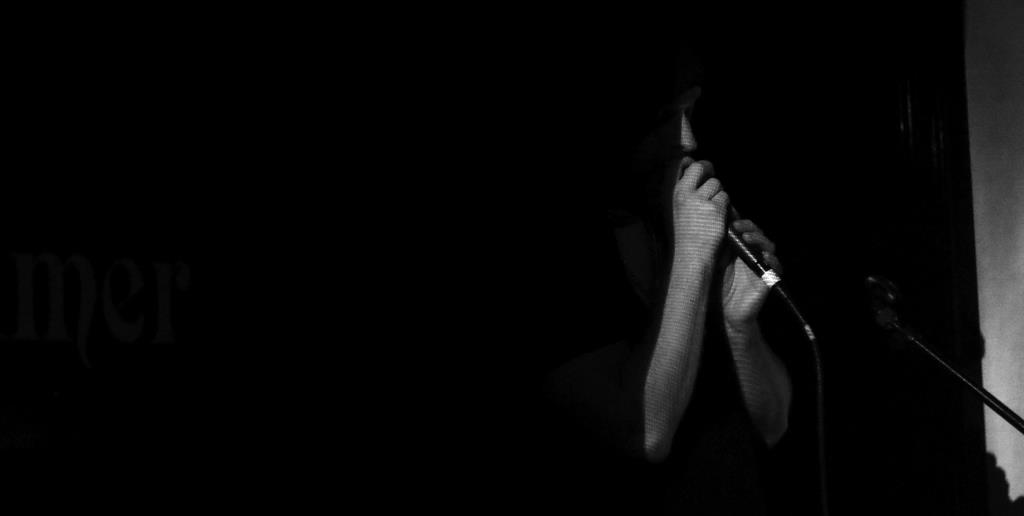 Time for some music photography, taken in the upstairs bar area of Chorlton’s Dulcimer back at the end of October.

The night was organised by Tru Luv, with KS Roosevelt the first act on. A laid back presence onstage, he performed solo accompanied by a series of backing tracks. The lines across his face in the photographs below are a result of the back projection, which I’ll write more about lower down. I trying to find an angle where the lights were shining off his sunglasses, but don’t think I captured what I was looking for.

A debuting Shy Heavens were on next. I’ve known Phill (organiser of this fine musical evening) since his early music promotion days working under the moniker Mushaboom, but have never had a chance to see him perform before. This was his first gig in three years, since he left his previous band Stay+ (former known as Christian Aids), who I missed seeing performing. Taken photographs proved tricky, as the stage lights were dowsed and the only illumination was from the ever-changing projection by Espher playing against the back wall, white lines stretching and transforming across the black. I ended up switching to an old manual lens, opening up the aperture as wide as possible and taking far too many pictures, trying to capture the best angle of the stage while also keeping the images in focus – tricky when the screen is filled with darkness. I think I managed okay, as the images below will attest.

A quick word here on the venue – Dulcimer’s upstairs bar area is long and thin, with the stage and immediate space around it very small and at a much higher level than the seating area. It doesn’t take much of a crowd to block the view of the stage. The previous is to explain why there’s no photographs of the final act of the night, Layfullstop, as I couldn’t get to a decent angle from which to photograph her.