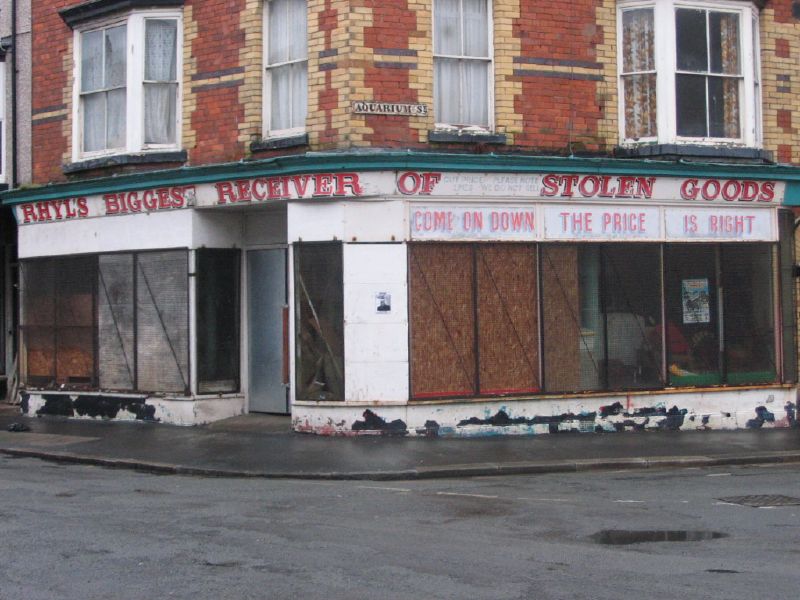 I’ve dug into my archives and pulled together a selection of photographs of Rhyl dating from around the mid-2000’s, when I used to visit the town fairly regularly.

The header image is of the “infamous” shop front of Rhyl’s Biggest Receiver… Of Stolen Goods. If you can’t make out the text, the small writing in the above photo reads “cut price lines” and “please note we do not sell”. I say infamous because in 2008, the local MP arranged for the sign to be painted over as it was “blighting the town” according to them. Rhyl’s had a lot of problems over the years – I recall reading a local newspaper describing some areas of the town as being amongst the most deprived in Europe – so I don’t think a solitary shop sign is deserving of such a label. The shop had been long closed when I took this photograph – I don’t recall ever seeing it open – and the building was eventually cleared away.

Here’s another interesting shop name, which I also never actually saw open. I like its straight-forwardness.

I also have a few photographs of the old Fun Fair, sadly after it had closed. It was abandoned for a good long while before it was demolished, making way for a giant car park. I have a vague memory of looking quite easy to get inside and explore the site. Sadly, I never ventured did and then I lost my chance.

I also don’t have any photographs of the Children’s Village. A collection of “cute” buildings by the sea that could never attract decent businesses to fill its shop spaces. You’d pop up from the underground car park below into the middle of an empty square, surrounded by quiet buildings. Being separated from the rest of the shops and arcades by the main seafront road didn’t exactly help. I recall it having the reputation as a White Elephant.

After I took the picture below of Slasher’s Barbers, the proprietor came out demanding to know why I took a picture of his shop, brandishing his scissors. He believed I was photographing the building for property development and I don’t think he was convinced when I assured him it wasn’t.

Lastly is The Glory Hole, which I believe is still open. I think it sold bric-a-brac and antiques, so why it had that particular name, I couldn’t tell you.